This book sets forth in considerable detail a project for yet one more “interlanguage” (to use the author’s own term), of which it can at any rate be said that its compilation has obviously involved a vast expenditure of time and energy, and that it is extremely ingenious in many respects. The author rejects, as too national or too European, not only Esperanto and all more or less similar tongues such as Ido and Novial, but also “Basic English,”—though he seems to credit the myth that English itself is “the language of some five hundred million people”. His aim has been to devise a language so wide in its appeal that the Eastern world will accept it along with the Western, and to this end he has constructed what is for practical purposes an a priori scheme, despite the fact that some of the roots (or “radicals”) have been taken from such tongues as Chinese, Japanese, Turkish and Arabic. Captain Searight may, however, be reminded that the a priori solution of the language problem has long since been given up by the majority of students of the question, and also that (as has been strikingly shown in the case of Esperanto) such nations as the Japanese, who are at present compelled to learn European languages if they wish fully to assimilate Western ideas, are able and willing to follow the lead of Europe in the matter of an auxiliary tongue. In other words, such a tongue, first and foremost a necessity for the European peoples (who for obvious reasons will not look at any a priori scheme), will be adopted in the East as a matter of course when it is fully established in Europe. To attempt to cater for the entire world is in any case chimerical; and in the present reviewer’s opinion even “Basic English” would have more chance in Europe, did Esperanto not exist, than Sona or any similar scheme.

None the less, Sona may be of interest to those who have a taste for the academic aspect of the language problem, and anyone wishing to investigate its character should get a copy of Captain Searight’s little book, as there is no room here for a detailed account of the scheme or any discussion of its merits and weaknesses. It must suffice to say that it has a good deal in common with Esperanto in the way of word-building, and appears to be a language that could be learnt and used. Whether it would prove in practice to have sufficient precision and clarity for international purposes would be a matter for deliberate trial; and on this point its author will doubtless remember that the proof of the pudding is in the eating, and that no new language can logically claim to compete with Esperanto until it has survived the ordeal of a great congress of twenty, thirty or more nationalities, at which all kinds of subjects (social, literary and scientific) are discussed—as at Esperanto gatherings—in the one language alone.

Mr. C. K. Ogden, the inventor of “Basic English,” contributes a Preface to the book, though he seems still to see a possible future for his own project, and cannot therefore, presumably, be greatly in favour of Sona. He asks whether the writer “has been wasting his time?” One fears that from the practical point of view the reply must be in the affirmative; unless, as Mr. Ogden suggests, “any new idea in the international language field may be of use to those who come after.” Incidentally, readers of this journal will be interested to know that in Mr. Ogden’s view Esperanto is among the languages which “have their roots in thin air which will one day give them their death-blow”. Fortunately for some of us, it would need a rather more powerful force than even a hurricane of thin air to deal such a sad stroke to Esperanto; and the various paper projects, not even being alive, do not need the stroke at all. 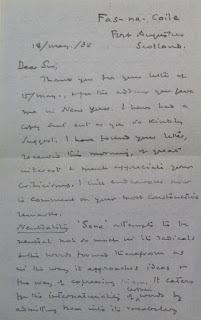 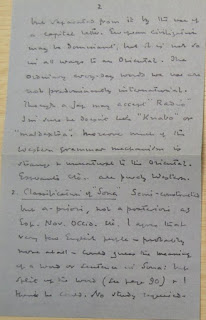 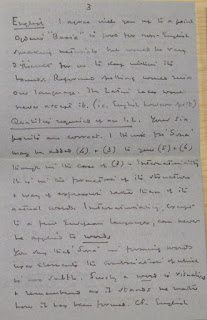 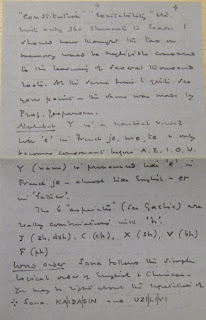 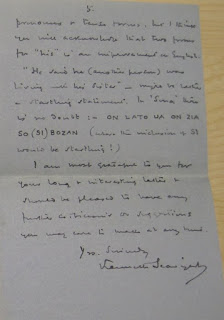 Thank you for your letter of 15/May., & for the address you gave me in New York. I have had a copy sent out as you so kindly suggest. I have found your letter, received this morning, of great interest & much appreciate your criticisms. I will endeavour now to comment on your most constructive remarks.

Neutrality
“Sona” attempts to be neutral not so much in its radicals & the words formed therefrom as in the way it approaches ideas & the way of expressing them. It caters for the internationality of certain words by admitting them into its vocabulary but separated from it by the use of a capital letter. European civilization may be dominant, but it is not so in all ways to an Oriental. The ordinary every-day words we use are not predominantly international. Though a Jap may accept “Radio” I’m sure he doesn’t like “Knabo” or “Maldextra”. Moreover much of the Western grammar mechanism is strange & unnatural to the Oriental. Esperanto etc., are purely Western.

Classification of “Sona”
Semi-constructed but a-priori, not a posteriori as Esp. Nov. Occid. etc. I agree that very few English people – probably none at all – could guess the meaning of a word or sentence in Sona: but split up the word (see page 90) & I think he could. No study required.

English
I agree with you up to a point. Ogden’s “Basic” is good for non-English speaking nationals but would be very difficult for us to keep within its bounds. Reformed spelling would ruin our language. The Latin races would never accept it. (i.e. English however spelt)

Qualities required of an I.L.
Your six points are correct. I think for “Sona” may be added (4) & (3) to your (5) & (6) though in the case of (3) – Internationality it is in the formation of its structure & way of expression rather than of its actual words. Internationality, except to a few European languages, can never be applied to words.

You say that “Sona” in forming words uses elements the combination of which is too subtle. Surely a word is visualised & remembered as it stands no matter how it has been formed. Cf. English “constitution” “excitability” etc.† With only 360 elements to learn I should have thought the tax on memory would be negligible compared to the learning of several thousand roots. At the same time I quite see your point – the same was made by Prof. Jespersen.

Word order
Sona follows the simple logical order of English & Chinese. You may be right about the repetition of pronouns & tense forms, but I think you will acknowledge that two forms for “his” is an improvement on English.

“He said he (another person) was living with his sister” – might be rather a startling statement. In “Sona” there is no doubt :- ON LATO UA ON ZIA SO (SI) BOZAN (where the inclusion of SI would be startling!)

I am most grateful to you for your long & interesting letter & should be pleased to have any further criticisms or suggestions you may care to make at any time.